A Masturbatory ‘Homage’ to My Family 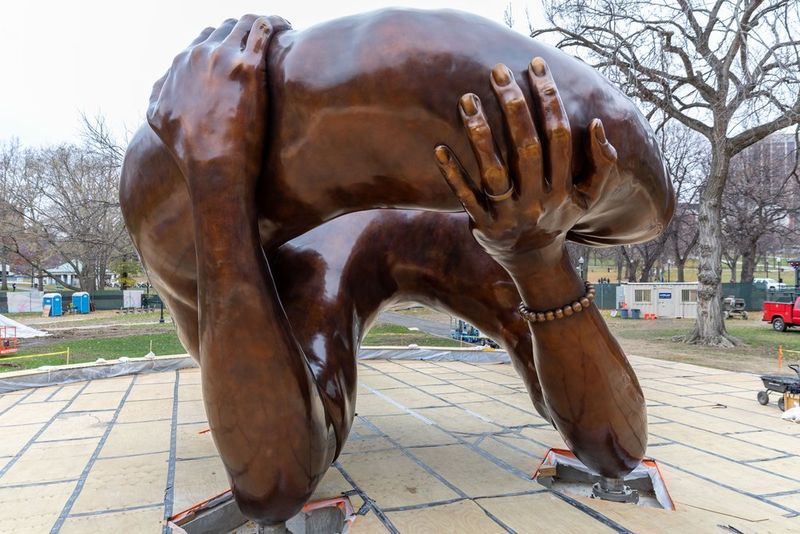 By now, I’m sure you’ve seen it. The new Boston sculpture “honoring” Dr. Martin Luther King and his wife, Coretta Scott King, looks more like a pair of hands hugging a beefy penis than a special moment shared by the iconic couple. Created by the organization Embrace Boston, the sculpture has inspired mad jokes on Twitter, and rightly so. But for my family, it’s rather insulting. You see, Coretta was my first cousin, my grandfather’s niece, and the daughter of my great uncle Obediah Scott.

Martin married up. Coretta came from a distinguished family, with a significant legacy in her own right. There is a reason she kept the Scott name. We were a black family that owned land, lots of it. Martin knew what he was doing when he pursued her, signaling intentions to marry from the outset. After his assassination, Coretta created a legacy of her own, fighting for health-care workers and against Apartheid in South Africa.

“The Boston debacle … exposes the insidiousness of astroturfed woke movements.”

Ten million dollars were wasted to create a masturbatory metal homage to my legendary family members—one of the all-time greatest American families. Still, the Boston debacle could be a blessing in disguise, by exposing the insidiousness of astroturfed woke movements that have come to dominate black America: How could anyone fail to see that this was a major dick move (pun intended) that brings very few, if any, tangible benefits to struggling black families?

“Consider this our Declaration of Interdependence,” declares the Embrace Boston website. What does that even mean? Black families in America who need help don’t care for more woke slogans. They need jobs that pay the bills and keep up with food and energy costs that are rising faster than ever before for most of us. Building expensive, stupid new statues with no faces on them—and tearing down others for no good reason—are part of the same performative altruism and purity pageants that are mainstays of the woke left.

So now Boston has a big bronze penis statue that’s supposed to represent black love at its purest and most devotional. This is no accident. The woke algorithm is racist and classist. Therefore, its programming will always produce things that harm black and poor people. This sculpture is an especially egregious example of the woke machine’s callousness and vanity. Hopefully, it will show more black people that these progressives just aren’t in this for our benefit.

Seneca Scott, a former organizer with SEIU Local 2021, is the founder and director of Neighbors Together Oakland.