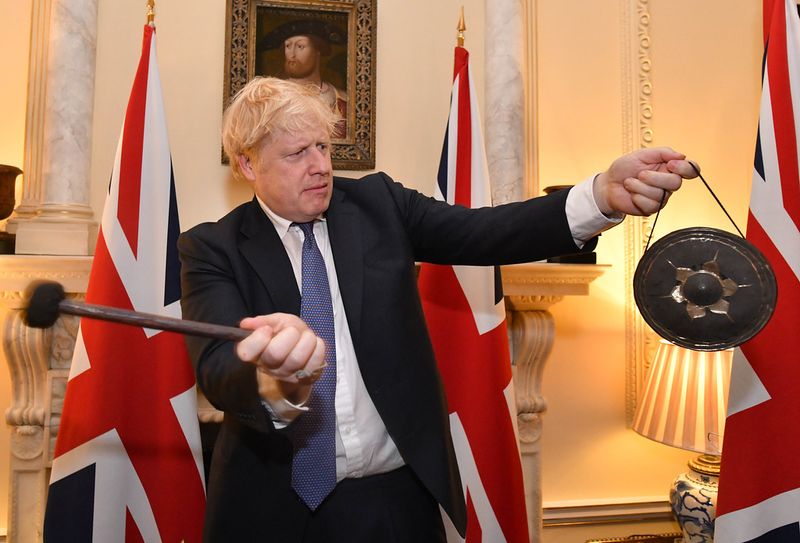 Boris Johnson on Monday survived a vote of no confidence over his lockdown partying. A significant segment of the British prime minister’s Tory party lost faith in him after he was fined for attending a party in June 2020 in violation of Covid rules. But the alternatives to Johnson—Foreign Secretary Liz Truss or former Health Secretary Jeremy Hunt—were apparently insufficiently appealing. The Tories may have good reason to hesitate. Johnson delivered them a majority of 80 seats in 2019.

Whether Johnson will suffer any longer-term damage will depend on how successful he is in shifting attention from Covid to Ukraine—or anything else. If he can’t, then he may face the same torturous unwinding process that befell Teresa May after her authority was fatally undermined by her unsurprising inability to please all sides during Brexit. His downfall will come about in part because he has failed to deal with the fundamental problem facing Britain now that it has left the European Union.

The British state and its people find themselves in a strange historical situation: once again at the forefront of World History. Of course, much has changed since the last time this was the case. In 1640, the emerging English bourgeoisie, embodied in the revolutionary figure of Oliver Cromwell, overthrew the old feudal system in the world’s first bourgeois revolution. Today, it is instead Johnson and the Conservatives who lead Britain as the first state in the world to break from the European Union.

“A post-Brexit return to the old form of the British nation state is simply not possible.”

The scale of the task facing the Tories shouldn’t be understated. Going against the supposedly irresistible force of European integration, they must now determine what the British state will look like and how it will function outside the European Union. The union is the defining institution of neoliberalism, above all in the way it enables the elites of its member states to insulate the economy from political decision making. Britain’s transition away from the bloc is also a case study in what happens when an EU member state attempts to undo the long-term effects of decades of European integration.

To grasp the meaning of European integration beyond the bromides of pro-EU ideologists, it is necessary to look to member-state theory, a theoretical body of work that suggests that European integration should be understood, above all, as a process of state transformation. The state transformation in question is from the nation state to the new category of EU member state. A nation state is a familiar political construct: a vertical relationship between political elites and citizenry in which a state gains legitimacy through representing the people. A member state is, on the other hand, a horizontal relationship: policy direction and inspiration are to be found in interactions between the political elites of different member states in the various councils of the European Union. EU political elites, in the post-political decades of the 1990s and 2000s, increasingly turned away from domestic citizenries and national political contestation to draw legitimacy from the elites of other EU states. In other words, the state’s claim to power and authority came not to be grounded in representing its people, but in the vaguer claims to competence and expertise gained from interacting with the political class of other states in the union.

The transformation of nation states into EU member states fit in well with a series of political and social developments that had already begun across Europe after World War II. Declining membership in political parties, falling church attendance, long-term drops in union membership, and low and decreasing rates of voter turnout all pointed to an erosion of the earlier bases of mass politics in civil society. Taken together, these changes in the vehicles of representative politics were described by the political scientist Peter Mair as the “voiding” of democratic politics: An empty space came to sit where previously social interests had been organized by a wide range of civil-society institutions, above all by political parties.

It is this voiding of representative politics, combined with the transition from a nation state to a member state, that explain the situation the British state is now in. Such is the depth of these transformations that a post-Brexit return to the old form of the British nation state is simply not possible. Political vehicles of all sorts are hollowed out; the political traditions of socialism, liberalism, and conservatism are all exhausted or broken by Brexit. The infrastructure of local government has also been gutted in the past 30 years. All in all, the representative mechanisms that provided the legitimacy for the British nation state are in terminal disrepair.

At the same time, the more recent course of finding legitimacy through the European Union is also not available. The British political class can’t hide behind EU rules as external constraints on action and evade political accountability; the policy networks and intra-elite legitimation mechanisms of the member-state structure are no longer available. No longer a member state, and unable to return to the older status of nation state, the British state is therefore subject to the legitimation crises of a wholly new state form: the post-member state.

It is this post-member state that Johnson and his party must lead into uncharted territories, with Johnson (perhaps understandably for a Conservative politician) more interested in looking to Churchill than to Cromwell. In the absence of the European Union, the post-member state and its political class have lurched from emergency to emergency in search of a basis for authority. The Covid era, which began less than two months after Britain formally left the European Union in January 2020, was a partial success. It was partial in the sense that, although the state showed its ability to control the movement of many of its citizens through the mass demobilization of lockdowns, it also demonstrated that it lacked the political authority to construct any positive program of political mobilization (despite considerable public support for a program of active citizen engagement). Latching onto the war in Ukraine, Johnson saw a more fully Churchillian opportunity while others were busy looking to Ukrainian nationalism to stand in for a domestic nation they couldn’t countenance.

To invert the old cliché, the new form of the post-political member state is dying without the support of the European Union, and the old form of the nation state cannot be reborn. In this interregnum, the morbid symptoms of Covid and Ukraine are only the start, as the post-member state flails around looking for sources of legitimacy and authority. Until this legitimacy is grounded in a new relationship with the people, the post-member state will continue to be defined by the double negative of being neither a member state of the European Union nor a nation state of the older type.

George Hoare is a co-host of Bungacast.