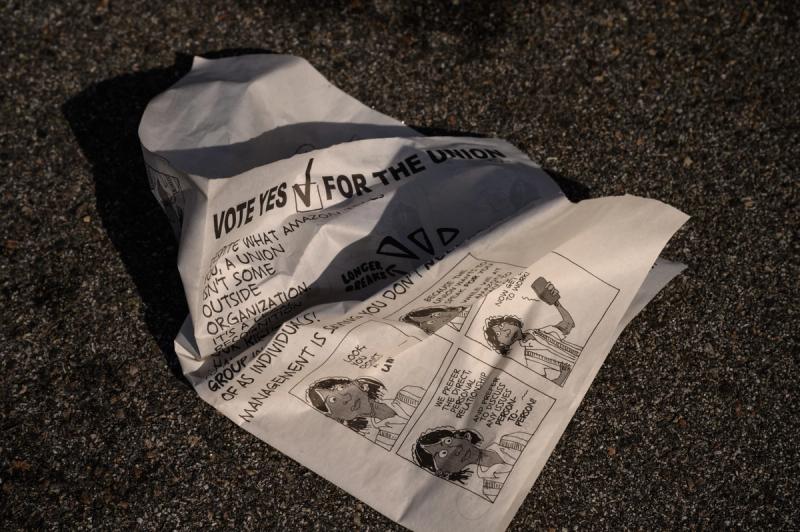 On Wednesday, a National Labor Relations Board election concluded at Amazon’s JFK8 warehouse on Staten Island. If a majority voted Yes, the facility’s estimated 8,000 workers will have taken a decisive step toward collectively bargaining with one of the nation’s largest, most ruthless employers; results are expected Thursday.

Whatever the outcome, the NLRB vote is a triumph for Christian Smalls, the pugnacious founder of the independent Amazon Labor Union. It’s also a measure of the strength—or rather, the weakness—of the “strike wave” sweeping the economy. Notwithstanding the sectoral and geographic spread of today’s organizing drive, the inflow of workers into unions remains a trickle compared to unionism’s halcyon days from the 1940s to the ’60s.

Understanding the historic decline of private-economy unions is essential to reversing it. Many pundits today identify globalization and automation as the chief culprits behind the long-term decline of unions. If correct, then workers face a dire situation, indeed. To win better wages, working conditions, and job security, they must battle the globalizing, automating thrust of World History itself.

But what if that’s wrong? Or incomplete? One alternative explanation is that America’s private unions declined because this nation’s corporate employers and their political satraps became very good at waging class war. Put another way: Unions haven’t lost power primarily because of globalization and deindustrialization, but because of union-busting employers.

It’s a much less popular theory—but there is significant data to back it up.

The ALU story is instructive. Beginning at the height of the pandemic in March 2020, Smalls, then a worker at JFK8, noticed that colleagues were coming to work with Covid’s now-familiar symptoms. When he warned bosses, they dismissed his concerns and reassured him they were following public-health guidelines. When a colleague tested positive days later, human resources told her to keep her diagnosis “down low,” as she told The New York Times.

Smalls, a father of three, was reasonably concerned about his and his family’s health. Vaccines were not yet available, and mitigation against the virus was poorly understood. He began circulating news about cases in the facility. Later, he led a lunchtime walkout of his colleagues. They simply asked, according to the Times, for “the building to be temporarily closed and more stringently sanitized and for workers to be paid during the hiatus as several had become sick.”

“Unions haven’t lost power primarily because of globalization and deindustrialization.”

Amazon fired Smalls. More than that, the mega-retailer resolved to make an example of him. “We should spend the first part of our response strongly laying out the case for why the organizer’s conduct was immoral, unacceptable, and arguably illegal,” wrote Amazon general counsel David Zapolsky in an internal memo obtained by Vice News. Zapolsky added that Smalls is “not smart or articulate” (the lawyer later insisted he didn’t know Smalls is black at the time he wrote those words).

A few months later, in the wake of George Floyd’s murder in Minneapolis, Amazon would lead the march of corporations proclaiming that Black Lives Matter. Meanwhile, Smalls and a few allies still on the inside at JFK8 went to work organizing the ALU. And so began the union’s journey through the gauntlet that is American labor law—a body of legislation originally enacted to promote collective bargaining, but which in the decades since has been deformed by the Supreme Court and successive GOP administrations into a veritable anti-organizing instrument.

As the Economic Policy Institute’s Lawrence Mishel, perhaps the premier progressive labor economist today, and his co-authors conclude in a pathbreaking 2020 white paper, the reason private-economy unions are in the doldrums is that “corporations took advantage of the weak labor-law regime in the United States to thwart union organizing and robust bargaining.”

Corporate employers’ effort to undermine collective bargaining got underway a little more than a decade after the passage of the 1935 National Labor Relations Act. The pivotal shifts came in the 1970s. That’s when the share of workers voting in, and then winning, union elections and contracts, declined precipitously. The pivot period happened to coincide with the rise of automation and intense global pressure on US manufacturers. But, Mishel and his coauthors argue, correlation truly isn’t causation in this case. And they have the empirical data to prove it.

To get a union, workers have to jump three hurdles. First, they have to gather enough signatures to show that there is sufficient interest in an election. Second, they have to win said election by majority vote. Finally, they have to hammer out a contract with the employer within a year of their ballot-box victory. The ALU, for example, has just tried to pass the second hurdle (the election), having garnered the necessary signatures after initially failing to do so.

As Mishel and his co-authors show, however, the share of employed Americans jumping each of those hurdles shrank, especially in the 1970s and ’80s. The share of employed Americans participating in union elections fell by 90 percent between the 1950s and the early 2000s. Election victories have also become rarer since the immediate postwar decades. Unions won 4 of 5 elections in the 1940s. By the mid-’70s, the victory rate was down to less than half; by the ’90s, it was 40 percent. Finally, victorious unions have struggled mightily to win contracts since the ’70s. In the ’50s, 86 percent of newly formed unions got a first contract within a year and thus avoided decertification; 56 percent did in the ’90s.

What happened? It certainly wasn’t the case that unions’ “collectivist” New Deal ethos clashed with the civil-rights movement’s “individualist” sensibility, as some liberals claim. It’s true that unions, to their shame, once barred the way to women and African-Americans. But once the Civil Rights Act forced them to open the gates, African-Americans and women emerged at the forefront of union organizing. Indeed, black women were the only demographic that enhanced its representation in the otherwise-dismal ’70s; a union-busting consultant even warned managers in 1979 that “blacks tend to be more prone to unionization than whites.”

But what about the Asia-and-robots explanation, beloved by Atlantic columnists, among many others? This explanation, too, falls short. Globalization and automation have undoubtedly threatened manufacturing employment in the United States and other developed nations. But hold on a second, say Mishel and his colleagues. Since the mid-1970s, union coverage—the share of workers who are either union members or otherwise covered by a collective-bargaining agreement—has lessened for manufacturing industries. Yet “the decline was far from unique.” Manufacturing union coverage collapsed by 74 percent from 1977 to 2019; in nonmanufacturing, it fell by 60 percent.

Statistical analysis of the coverage leads Mishel and colleagues to conclude that “the erosion of the manufacturing share of employment from 1979 to 2019, a decline from 30.2 percent to 12.6 percent, is responsible for a decline of private-sector union coverage of 3.3 percent, or about a fifth of the overall 15.8 percentage point decline in the private nonagricultural sector.” Globalization and automation, the forces that displaced domestic manufacturing and slashed the industrial share of the US labor market, are important factors behind union misery—but they aren’t “dominant.”

In a simulation conducted by the authors, in which they transposed 2019’s de-industrialized conditions to 1979’s economy, union coverage only changed by 2.5 percentage points. Bottom line: “The shift out of manufacturing employment has had an impact that accounts for less than a fifth of the overall decline of private-sector union coverage between 1979 and 2019.”

If globalization and automation aren’t chiefly to blame, and if the risible scapegoating of the civil-rights movement for undermining the New Deal is just that, the best and simplest explanation is class politics. Mishel and his authors decry the “policy drift” of US labor law, away from encouraging collective bargaining toward granting employers every possible advantage and barely rapping them on the knuckles when they violate the few pro-worker safeguards still remaining.

In the almost 90 years since the passage of the NLRA, lawmakers, courts, and GOP-dominated labor boards have authorized employers to hold “captive-audience” meetings at which employers can militate against unionization (without having to allow unions to present their view); to threaten workers against unionizing (as long as the firm just skirts certain red lines); to bar organizers from company parking lots (except in narrow cases); to shut down the business entirely to avoid unionization; and on and on.

When employers still violate these already-pro-company rules, penalties are “scant. No fines are levied, no employer goes to jail, and any costs incurred are negligible.” A new election is sometimes ordered in case of repeated violations, as happened in the case of an Amazon warehouse in Alabama, but the coercion will have already worked its effects, instilling fear in workers and chilling Yes votes.

Which brings us to Christian Smalls and his Amazon Labor Union. Smalls managed to win an election despite Amazon’s notoriously vicious union-busting practices, including the confiscation of “pro-union pamphlets they left in the break room” and “surveilling where [organizers] congregated on a sidewalk,” according to the Times. The ALU filed nine interference complaints with the NLRB in the course of the signature drive; the board has found that at least three have some merit. Once enough signatures were gathered, the company rolled out the captive-audience “trainings” at Staten Island, with numerous anti-union consultants present, denouncing the fledgling union for its lack of experience and warning that workers could lose their wages and benefits; Amazon also sicced the NYPD on Smalls after he and ALU colleagues brought food to the workers.

Smalls and the ALU may yet beat these odds. But the strike wave won’t translate into wider and more durable gains for the American working class unless its political allies recognize that the odds were stacked against unions by corporate America and its captive politicians and bureaucrats.